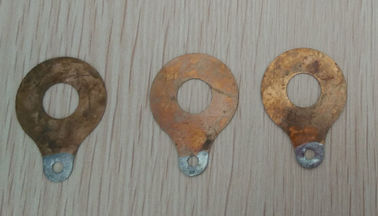 Another example of a shock event might be the sound created as a wooden board falls with its face against
a cement floor. Shock events are sources of a single compression wave which radiates from the source.

The Nature of Sound Waves
The diagram above uses the coils of a spring similar to a Slinky toy to represent individual moleculesof a sound conducting medium. The molecules in the medium are influenced by adjacent moleculesin much the same way that the coils of the spring influence one another. The source of the sound in the model
is at the left. The compression generated by the sound source as it moves propagates down the length ofthe spring as each adjacent coil of the spring pushes against its neighbor. It is important to note that,although the wave travels from one end of the spring to the other, the individual coils remain in their same
relative positions, being displaced first one way and then the other as the sound wave passes. As a result,
each coil is first part of a compression as it is pushed toward the next coil and then part of a rarefaction as it
recedes from the adjacent coil. In much the same way, any point in a sound conducting medium is alternately
subjected to compression and then rarefaction. At a point in the area of a compression, the pressure