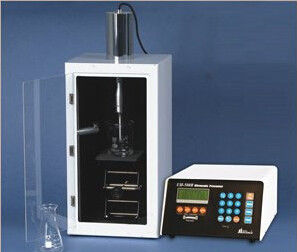 The ultrasonic cell disruptor is made up of two parts: ultrasonic generator and transducer,

the former transiting 50KHz 220V into 20KHz as power supply to the latter.

the transducer responds by portrait mechanical vibration. The vibration wave via a Ti alloy amplitude bar,

which is soaked in the biological solution, produces cavitation effect and dries biological particles

in the medium librating hard.

hard to be mixed polymerize some matters and separate out some other.

Generally speaking, it can process various functions such as distillation, smash,

and preparing different kinds of biological samples under an electron microscope.

Disposing of organic and inorgani compound safely and efficiently .

Mainly used for crush of virus and bacterium of the cell and tissue of the various of animal or plant,

crush and combination again of the various of inorganic compound.

Widely used in the field of biochemistry,microbiology, pharmacology,medicine and etc.